skip to main | skip to sidebar

The CS-80R is designed to capture the sound of my beloved old Yamaha CS-60,
with various enhancements drawn from the CS-80 and GX-1 designs.
download 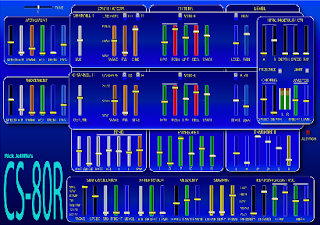 DaHornet is a virtual simulation of the WASP synth, which offers up a wide assortment of great bass sounds. It is one of the rare VSTi's that includes MIDI-learn, and a random-patch generator. DaHornet used to be a commercial product, but is now free to download, and the registration serial number is given on the download page.
download

An "Emulation" of Crumar Multiman S with follow specs:

Many thanks to Kujashi for the inspiration and sounds !!
download

My first - and probably only - attempt at a hardware synth emulation!

The reasons for this one is purely nostalgic - I used to own one of these back in the 80's. The hardware version was manufactured by a Big Japanese Company, and it was quite popular as an entry-level, ultra-portable and above all cheap synthesizer. If there is one piece of old gear I truly miss now and then, this is it. Not for its sound, but just because it was so darn cute! Well, here it is again - in VSTi format. Hardware synth buffs and those who were there at the time, enjoy!
download Leto is an emulation of the Synthetone SX1000, a monosynth released by Italian manufacturer Jen in 1977.
download

MELTRON is a free VST plugin which recreates the sound of the most famous tape replay instrument also known as "Mellotron". Features :

The Minimogue is a lead, FX and bass synth just like the real Minimoog. It is programmed to be as expressive as possible. This is a synth for the players. Modulation wheel takes a big part in the solo sounds. Also try to play long legato lines to hear the full sweep with sounds like Big drift. It is cpu friendly. CPU load is 1% on a 1,5 centrino machine. On my old P4 1,7 machine CPU load is 3 %.
download Nanotron is a recreation of the Mellotron that I owned through the 80's, the voices were recorded on a Studer A80 in 1979, In 2004 I set about cleaning up the recordings, correcting pitch errors and creating the plugin.
download The Pro-1 has simular features as the Sequential Circuits Pro-One synth.
download

Roland® SH-09 Monosynth Emulation. It comes with a LFO modulator with random step voltage and can be used to modulate the oscillator, the filter, and the pulse width. Also includes an invert switch for the envelope, which can modulate the filter and pulse width, as well as the amplifier. Includes the *.se1 file for end-user modifications.
download This plugin emulates the ultra-funky sound of the Hohner Clavinet, forever associated with Stevie Wonder's "Superstition".
The synth engine is based on a physical modeling algorithm, faithfully reproducing the strings vibration and the 2 pickups of the Clavinet Model C. Special attention has been given to reproduce the non-linear interferences in strings decay, for an even more realistic sound. The characteristic "click" sound on key release is also emulated.
A built-in wah-wah effect with selectable manual/autowah mode is also included.
download
report broken link 0 reviews

Emulation of the classic 909 drum synth. Make sure that you put the 'programme' folder full of samples in the right directory - which was C:\ for me.
download The U-NO-60 vst plugin is a polyphonic virtual analogue synth with a unique filter sound. An original JUNO 60 is used as reference for the oscillators and filters.
Like the original, the plugin is capable of self-resonance and thus could be used to some degree as a tone generator.
The filter section also features controls for envelope amount and polarity, LFO modulation and keyboard tracking. In addition, a non-resonant highpass filter is provided to thin out lower frequencies.
download

VST plug-in for authentic Atari ST chipsounds
Emulates the built in YM2149 sound chip with a decent plugin user-interface on your PC.
download

Based on ARP's legendary semi-modular analog monosynth This amazing softsynth sounds very close to the original ARP 2600. Like the original, it's a monosynth (no polyphony). But, also like the original, it has a multitude of Frequency Modulation options which enable it to create some truly awesome sound effects. PWM, Sample & Hold, virtual Spring Reverb, Ring Modulation, and a dedicated Noise Generator are all there! Also, there are some things even the original Arp 2600 didn't have, like Oscillator Sync and Filter Color (to adjust between LowPass and HiPass filter types).
download